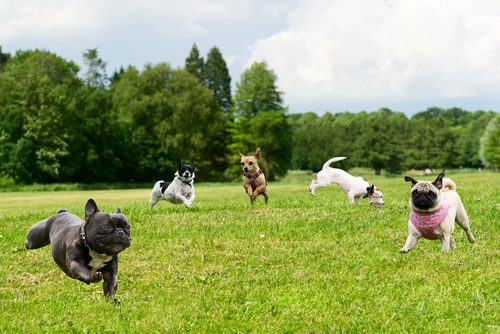 For the past two weeks, I’ve been writing some caveats about dogs at play: things to be aware of when dogs play together such as at dog parks, playgroups and daycares. Dog play involves a number of specific behaviors, which dog-loving humans really enjoy watching.

There are six specific behaviors that may be included in dog play: stare, stalk, chase, nip, grab and shake.

Not all dog play involves each of these. Your dog may race around and wrestle with another dog (chase, grab and shake/wrestle). Or grab a toy and shake the heck out of it. And depending on genetics, your dog may stare intensely at a buddy, stealthily approach, then suddenly break into a great game of chase — all normal, harmless, fun behaviors.

Play behaviors are programmed in the dogs’ DNA, but not as play. These are all hunting behaviors related to survival: finding, approaching, catching, and killing dinner.

The domestic dog shares many of the same genes as its relatives, members of the genus Canis (the domestic dog is Canis lupus familiaris). This genus includes wolves, jackals, coyotes and dingoes. Even the sweetest dog in the world shares DNA with his predatory ancestors — hunters and scavengers. Play between wolf cubs looks just like dog play, but the wolf cubs are honing their skills for hunting as adults.

Consider the behavior chain you’ve likely seen in a film of a wolf pack on the hunt. The wolves eye their prey, staring intently. Then they stalk stealthily closer, sneaking as close as possible before being noticed. Sensing danger, the animal takes off, and the chase begins. When the wolf catches up, it bites, grabs, shakes and kills.

With the exception of “kill,” each element of the hunt is what we see in normal, non-violent play between dogs: stare, stalk, chase, nip, grab, and wrestle. Put another way: Dogs play behaviors are the vestiges of predatory behavior. Which brings me to the topic for this week’s column: “predatory drift.”

Predatory drift happens when normal play suddenly “drifts” over the line and the dog’s predatory instincts kick in and take over. At that moment, if something doesn’t happen to stop the behavior, it can turn ugly. Predatory drift is what happened in the cases I wrote about in my last two columns, in which dogs were either badly mauled or killed by otherwise perfectly nice, normal dogs.

Predatory drift can happen suddenly and unpredictably. It can even occur between two dogs who have played together for years – or live together and have always gotten along. Suddenly something triggers a fight.

The trigger for predatory drift can be pain, over-arousal (play that gets out of hand), or a yelp or scream. It can happen when a dog is hurt or frightened by another dog in play and squeals. The squeal triggers a predatory reaction, which can ripple through the entire pack in an instant. Unless people are right there to stop it, the result is what happened to Jasper the Old English Sheepdog I wrote about, who yelped and was attacked by 13 dogs.

The attacking dogs are not bad dogs. They are simply dogs. It isn’t a conscious reaction; it’s visceral and instinctive.

It isn’t just dogs that behave this way. Consider what happens to a mob of fans at a soccer game, or a group of normally-civilized people standing on the sidewalk yelling “Jump!” to the poor, troubled person out on the ledge. Or consider how differently teenagers may behave in a group, or gang members when they’re together in a “pack.”

The issue of predatory drift in a doggie daycare, playgroup or dog park situation is something that anyone in attendance must be aware of, whether they’re employees supervising the group, or owners watching their own dogs.

Well-run dog parks have separate areas or times for small dogs, to protect them from the dangers of play with a larger dog. Well-run doggie daycares do the same, protecting small dogs from even the possibility of tragedy.

It isn’t that two differently-sized dogs might not play very well together, but if predatory drift occurs between dogs of disparate sizes, the “shake” can kill the small dog quickly, before anyone can even begin to intervene.

My purpose in writing about these topics is not to alarm or upset readers, it is to educate so you’ll be your dog’s best advocate and protector. Dogs greatly enjoy and benefit from playing with other dogs in a multi-dog setting such as a playgroup, dog park or daycare. It would be sad to deprive them of this terrific outlet and enjoyment.

The caveat for owners is to be aware of the possibilities and take all due care. Don’t put your dog in an unsupervised or poorly supervised play environment, and at a dog park, don’t put your small dog in a group with larger dogs, and stop overly exuberant play before it might go over the top.

Stopping play is a simple as stepping between two dogs, and redirecting their play, or holding them quietly on leash for a minute or so to give them a chance to settle down. If the highly aroused level of play continues, the dogs are likely overly stimulated, and it’s time to go home.